Framework of EHS laws and regulations in Indonesia.

The Republic of Indonesia is a country in the south part of the Southeast Asia comprising over 17,000 islands and stretching over 5,000 km from the East to West. With the land area of 1.89 million square kilometers, the country is known as a country with the largest number of islands in the world. It has the largest Muslim population in the world: the total population is about 260 million people and about 90% of them are Muslims. Indonesian is the national language but diverse local languages are used in everyday life because it is a multi-ethnic country. The largest ethnic group in Indonesia is Malay. For the demographic composition, the country has a large young population with about a half of the country’s population is 26 years old or younger. The so-called “demographic bonus,” which means a condition in which the productive age population is increasing, is expected to continue in Ind onesia until 2030.

In Indonesia, the constitution, which is the legal basis of the country and has the highest legal effect, was established in 1945 and amended in 1999, 2000, 2001, and 2002. In terms of the environment, the constitution guarantees the right to enjoy a good and healthy environment as one of fundamental human rights. Second, as one of the basic policies for the country’s economic growth, it mandates to have the environmental perspective among others. 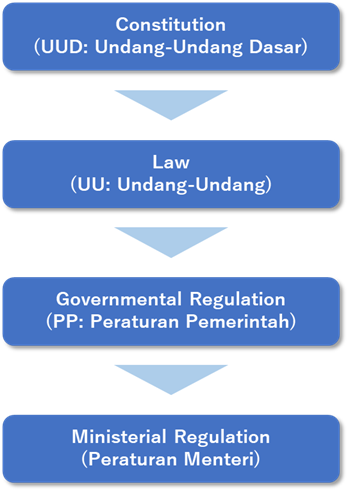 In Indonesia, each of local governments at the province level and regency/city level) is given the right to enact its own regulations. Therefore, with regard to environmental issues, close attentions should be paid on such local regulations not to miss rules on waste management or wastewater quality standards for example that are already enacted in some areas of the country. Please note that Indonesia has 34 provinces (including Special Region of Yogyakarta), 416 regencies and 98 cities[1].

Law on Environmental Protection and Management

Under the Law 32/2009, various government regulations have been set on the management of chemical substances, wastes, water quality and air quality. There are also ministerial regulations/decrees under each government regulation stipulating detailed rules for implementing the regulations. In fact, to ensure the compliance with environmental regulations in Indonesia, it is critical to confirm mandated threshold values, documents to be submitted, application forms to be used, etc. that are set in various ministerial regulations/decrees. The hierarchy of these legal documents is as shown below. See the relevant section for details on each.

In addition to Law No. 32/2009, laws governing EHS include the Laws on Solid Waste Management, Energy, Occupational Safety, and Manpower. The below indicates the overview of each law:

[2] Regarding environmental crimes, the Ministry of Environment and Forestry investigators are given the same authority as police investigators (Article 94 of the Law 32/2009)

[3] The penalties under Law 32/2009 are far stricter than those under Law 23/1997. So it caused a huge controversy across the country at the time of promulgation. For example, in March 2010, industry groups of oil and mining companies expressed their opposition to the Law 32/2009, saying the penalties would be too strict and hinder their operations. In addition, the Ministry of Energy and Mineral Resources also requested to postpone the enactment of the Law.