Waste electrical and electronic equipment (also known as WEEE or e-waste), which includes a wide range of end-of-life devices such as computers, refrigerators and mobile phones, is considered as a waste category that sees the highest growth rate due to our modernized life that depended largely on electrical appliances and computer systems. In Thailand, the issue of waste management has been identified as a national agenda. The National strategy on WEEE was approved by the cabinet in 2007 and recently the WEEE Management Bill has been proposed, drafted and recently revised to cope with such a problem. The latest version of the Bill was circulated for public hearing on April, 2021.

On July 2021, the Pollution Control Department has published a draft version of WEEE Integrated Management Action Plan B.E. 2565 – 2569 (2022 – 2026) on its website. This draft Action Plan shows the current situation of WEEE management, the current regulations and policy on WEEE, and outlook on activities under the Action Plan. Hereinafter this article will review these issues.

The report on hazardous waste discharged from local communities during the year B.E. 2563 (2020), issued by the Pollution Control Department, has shown that the amount of e-waste generated is at approximately 418,113 tons per year. Another survey result also shows that about 80 percent of e-waste has potential for recycling. Currently, management of e-waste in Thailand is still inadequate. Approximately 90 percent of the amount of waste electronic appliances discharged from households are disassembled for recycling and the rest of the waste is disposed together with general solid waste. The general solid waste management system in Thailand is not designed to handle hazardous waste. Some of products that did not pass quality control are stored as waste at the manufacturing plant without any plan for disposal and there is no commercial recycling process for remains of some small products, such as fluorescent lamps and batteries.

According to information from the Electrical and Electronics Institute and the Office of Industrial Economics, the production volume of electrical and electronic products in Thailand during the year 2017 to 2020 is quite stable as shown in table below.

In 2020, the amount of WEEE generated was 418,113 tons. Of these, 214,056 tons were collected from households, 170,545 tons were sold to second-hand shops, 43,152 tons were sorted by local communities, and 360 tons were collected by local government organizations. Table below shows the amount of wasted electrical and electronic products generated during the year 2017 – 2020. It is shown that the total amount of WEEE increases continuously during the term. This should be a result of the rapid technological development, which often leads to replacement of electrical and electronic products. Importing low quality products also causes short service lives of electrical gadgets. Additionally, most people discard WEEE together with general waste, which results in inappropriate handling of WEEE, causing impacts on public health and the environment. 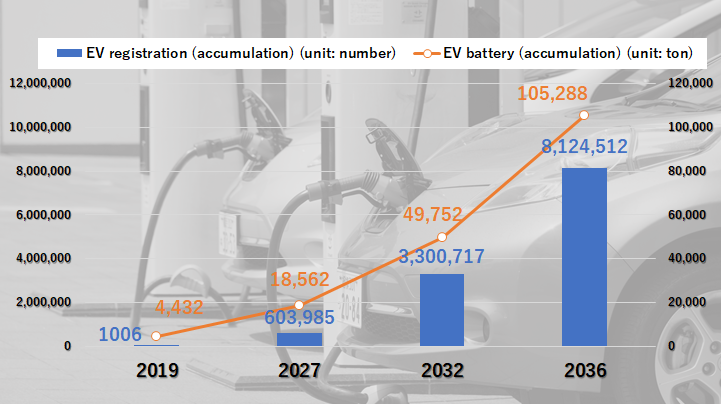 Currently, WEEE is classified as Class 3 Hazardous Substance according to Ministry of Industry Notification on Hazardous Substances List B.E. 2546 since it contains heavy metals such as lead, cadmium, mercury, etc. Lead is mainly from batteries, circuit boards, monitor tubes, and fluorescent lamps; cadmium is often found in printed circuit boards, resistors, cathode ray tubes; and mercury is often found in switches to control the opening/closing of the circuit board. These heavy metals can, if handled improperly, leak into the environment and be detrimental to health and ecosystems both in the short and long term.

The Pollution Control Department has carried out activities to promote the procurement of goods and services that are environmentally friendly as follows:

The Ministry of Finance has issued the Ministerial Regulation Prescribing Supplies and Procurement Methods that the State Wishes to Promote or Support (No. 2), B.E. 2563 (2020) dated December 8th 2020 in the Government Gazette on December 22nd 2020. This ministerial regulation facilitates the promotion of procurement of goods and services that are environmentally friendly, where the term “Environmentally Friendly Supplies” means goods and services with less impacts on the environment than the equivalent products or services but with the qualifications or quality the same or higher than the equivalent products or services. The regulation takes into account the process of procurement of raw materials, production, transportation, use, return to use, recycle and disposal.

Three main targets of the Action Plan are: