The month of November is when the winter season begins for Thailand. In the past years, during winter season, the air quality gets particularly worse than other seasons due to the elevated level of particulate matter (PM). PM2.5, which is a particulate matter that has a particle size of smaller than 2.5 microns, mostly originates from automobile exhaust gas, cigarette smoke, burning smoke and fuel combustion in factories’ processes. PM2.5 is hazardous for human health due its ability to get into the alveoli of the lungs, enter the bloodstream and eventually cause damage to the respiratory system. Recent statistics in Thailand have shown a higher rate of lung cancer for people who live in areas with a high level of PM2.5.

PM2.5 has got a lot of attention in Thailand since 2018 when the problem got intense in Bangkok and surrounding area. The PM2.5 pollution has been considered as one of the national agendas. An action plan named  “Solving the Dust Pollution Problem” was made for 2019–2024 and short term measures to combat PM2.5 were set as: 1) actively call out truck/bus from street to measure particles in exhaust, 2) expand road area to reduce traffic congestion, 3) eliminate all activities leading to dust generation 4) completely ban open burning, 5) inspect factories in Bangkok and nearby provinces, 6) generate artificial rain, 7) persuade people to use public transport system, and 8) controlling dust from construction sites.

Forest fire is believed to be the main contributor for PM2.5 in many regions of Thailand. Data has also shown that forest fire is mostly originated from human activities. On November 7th, 2022, Mr. Warawut SILPA-ARCHA, Minister of Natural Resources and Environment (MoNRE) announced a plan to prevent forest fires, smog and dust problems for the year 2023 to related public and private agencies and representatives from 76 Provincial Offices of Natural Resources and Environment, with Permanent Secretary of the MoNRE and Director-General of the Pollution Control Department (PCD) at the Center for Solving Air Pollution Problems, PCD. This event marked an onset of activities to cope with PM2.5 pollution problem for the year 2023 that is expected to experience more severe weather compared to that of the previous years because more drought weather is expected to occur from November 2022 to February 2023 from cold weather, low rainfall and the “La Nina” phenomenon that begins to subside. 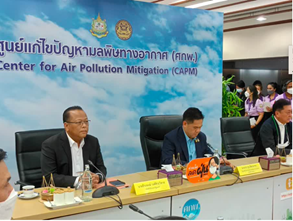 Mr. Warawut also explained that for big cities such as Bangkok and its vicinity, the situation of PM2.5 is mainly caused by traffic. In addition to existing activities under the action plan,  it is planned to take new measures for this year. First, to help improve emission from vehicles, fuel companies will supply low-sulfur gasoline to gas station at normal prices during PM2.5 season which will last around 3 months, from December 2022 to February 2023. Secondly, Federation of Thai Industries will also help more than 11 automobile companies to allow people to bring their vehicles in for engine cleaning and air filter changing at a special low price, in a collaborative manner. Thirdly, government’s vehicles should serve as an example of lower emission. That is, when an inspection official identifies that a certain governmental body’s vehicles emission does not satisfy the relevant standards, an improvement order will be issued within 30 days to the owner agency. There will be a follow-up to owner agency if no improvement has been made.

For rural area, the main cause of PM2.5 is forest fire. Haze usually comes from burning in protected forest and agricultural areas. For such areas, a set of additional measures will be taken for this year. The MoNRE will cooperate with Ministry of Agriculture and Cooperatives to advice farmers on reducing incident of burning. Officials will visit individual farmers’ houses to inform and raise awareness on PM2.5 situation. Other measures include: providing advance notice/early warning of air pollution problem; managing combustible materials by collecting combustible materials that can spread the fire early; and using “Burn Check” application to reserve time for burning in advance. All of these measures should help reducing the amount of PM in rural area. In addition, there is still coordination with ASEAN Secretariat through Ministry of Foreign Affairs to prevent and solve the problem of transboundary haze originated from neighboring countries.

Plans to Control PM2.5 by MONRE

The MoNRE has proposed “Ad Hoc Plan on Solving Dust Pollution Problem in 2023,” which is already approved by the National Environment Board. The plan will focus on three areas: 1) urban areas 2) forest areas and 3) agricultural areas. There are seven measures according to vision “Proactive Communication, Strengthen Operation and Building Participation”, consisting of:

One factor that is still beyond control is that the problem of smog that floats across the border from neighboring countries. What Thailand can do is only submitting documents to the Secretary General of ASEAN to ask for cooperation from countries where hot spots are detected. The most worrisome issue at this time is that for the past 3 years, from 2020 – 2022, the number of hot spots in Thailand has already decreased by 80%, meaning amount of burnable material has accumulated and increased a lot in forest areas for the past 3 years. Therefore, for the year 2023 and the upcoming burning season, the ministry has instructed relevant agencies to expedite the management of burnable materials to prevent both intentional and unintentional burning.

On the topic of preparation of Bangkok and its vicinity for upcoming PM2.5 season, it was explained that PCD will cooperate Bangkok Metropolitan Administration on providing situation information. However, some of the measures require administrative authority such as closing, prohibiting, and stopping business/industry/transportation, which is not held by MoNRE, and therefore require cooperation from other agencies that have direct authority such as the Department of Industrial Work (DIW) or the Bangkok Metropolitan Administration.

On the government response to recent episode of PM2.5 problem in Chiang Rai province that exceeded the standard for several days especially for vulnerable groups (child and elderly people) in the area. MoNRE has announced that it will cooperate with each provincial government that is assigned to be single command point in the responsible area to identify vulnerable people. It will also coordinate with Ministry of Public Health to find a safe area or safe zone for these group of people, especially during times when level of PM2.5 is high and harmful to health. Such vulnerable people must move to the safe zone provided by the province until the air quality returns to level that does not affect the health.

Mr. Warawut also gave advice to wear a face mask or N95 mask to prepare for the PM2.5 dust season, especially for the elderly and respiratory patients. He also recommended car users with  a long service life to take care of the condition of the car. He also said that Work From Home measure was still a possible measure and people should consider it depending on the situation because if implemented, it must be done in conjunction with closing the school. If the situation is not very serious the government hope that people can still come out to study and work as usual. However, if the PM2.5 dust situation becomes more severe, more appropriate measures shall be discussed.

Plans to Control PM2.5 by MOI

In response to MoNRE’s announcement, Mr. Suriya Juangroongruangkit, Minister of Industry (MoI) also announced that the MoI has also prepared to cope with the problem of small particulate matter (PM2.5) and has instructed industrial agencies to follow three measures: 1) in case it is found that factory emissions exceed standards, an administrative order should be issued immediately, this measure is called a short-term measure; 2) for medium-term measure, using a remote air pollution monitoring and warning system (Pollution Online Monitoring System: POMS) as an alternative for conventional inspection; and 3) for long-term measure, review and improve air pollution emission standards from factories to be equivalent to international standards. The ministry has assigned DIW to be the responsible agency in carrying out such measures in coordinate with other industrial agencies. This year, another measure, which has continued from last year, is performed, namely proactively inspecting factories that have combustion process, using coal as fuel, using boilers, being iron or metal smelting factory, ready mix concrete factory and asphalt production. The DIW has identified some 896 factories that have potential to cause small dust particles in Bangkok and its vicinity. This group of factories can be divided into: 260 factories in located Bangkok and 636 factories located in the vicinity provinces (Samut Prakan, Pathum Thani, Nakhon Pathom and Nonthaburi) all of which will be inspected and if found to cause particulate matter pollution, will be ordered to revise, rectify or stop operating immediately.

Mr. Julapong Taweesri, Director-General of the Department of Industrial Works, said that he had instructed all divisions to proceed in accordance with MoI’s policy by conducting a strict factory supervision to prevent the problem of small dust particles (PM2.5) from factory operations. In addition, in the past months, DIW has published new regulation requiring factories to install special tools or equipment (CEMS) to monitor air pollution emissions from industrial chimneys and requesting factories to send data to a remote pollution monitoring and warning system, which will be displayed on DIW’s Website at https://poms.diw.go.th and the POMS (Pollution Online Monitoring System) application. Stakeholders can view such information at all the time using the application which can be downloaded for both Android and iOS mobile phone systems. The DIW has also affirmed that it has encouraged factories to plan for their production and supervise their operations to comply with the regulatory standards. The air pollution control system must be maintained such that it is always effective.

This year marks the fifth year that people of Thailand face with PM2.5 pollution problem. The measures to be taken have also been improved from last year. With early preparation in this year, the government hopes that this problem will be less severe.