One of the most shocking case happened in June 2017. A group of interns at a food processing factory was given a tour of the plant, and the plant’s environmental officer who guided  them around had worked at the factory for less than six months. At wastewater treatment plant tour, one female intern suddenly fell into a four-meter-deep wastewater treatment pond. The plant’s environmental officer, who was leading the tour, was the first person to jump into the pond to rescue her, but they were both lost consciousness. Another three staffs then rushed to the wastewater treatment area to try to pull the two victims out from the pond, but they also became unconscious and fell into the pond. The three staffs, together with the female intern and the environmental officer, were later confirmed to be dead due to inhalation of toxic gas produced by the wastewater and lack of oxygen. Police investigation confirmed that the wastewater treatment area had to be an area restricted from entering because it falls under the definition of “confined space” but the fact that such area was never restrict was a violation of the law. Later, the factory manager was charged with negligence over the death of five people. 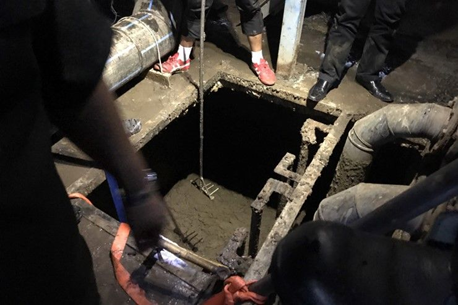 In general, a confined space can be defined as a fully or partially enclosed space that is not primarily designed or intended for continuous human occupancy, has limited or restricted entrance or exit, or a configuration that can complicate first aid, rescue, evacuation, or other emergency response activities. Confined space can represent a risk for the health and safety of those who enter due to: 1) its design, construction, location or atmosphere 2) the materials or substances in it 3) work activities being carried out in it, or 4) mechanical, process and safety hazards present. Common misunderstanding is that confined space must be at underground. In fact, confined spaces can be both below or above ground and found in almost every workplace. A confined space, despite its image associated with the name, is not necessarily small. Examples of confined spaces include silos, vats, hoppers, utility vaults, tanks, water supply towers, sewers, pipes, access shafts, truck or rail tank cars, aircraft wings, boilers, manholes, pump stations, digesters, manure pits and storage bins. Ditches and trenches may also be a confined space when access or egress is limited. Barges, shipping containers and fish holds are also considered as potential confined spaces. Hazards in confined spaces can include:

The regulation that designates standards for working in confined space is the Ministerial Regulation Stipulating the Standards for Management and Operation of Safety, Occupational Health, and Working Environment Relating to Confined Space B.E. 2562 (2019). This regulation gives definition of the term “confined space” as “location where access is limited and is not designed for regular continuous work and has dangerous conditions or dangerous atmosphere such as tunnels, caves, wells, pits, basements, vaults, oil tanks, fermenters, tanks, silos, pipes, furnaces, containers or other similar condition” and gives definition of the term “hazardous atmosphere” as “atmosphere conditions that may expose employees to harm and fall under any of the following:

The regulation also prescribes criteria for factory owners to follow that can be summarized below:

Aside from the regulation, as lessons from many accidents of this kind, general recommendations for factory owner are:

The regulation, updated in 2019, aims to fix such problems. With this regulation, we will see if the situation will get better or not.