Today’s global temperature has increased by approximately 0.85 degrees Celsius from the 1880s, when the world’s first coal-fired power plant begun its operation, with the high concentration of greenhouse gases at around 401 ppm in the ozone layer (based on IPCC 2014’s 5th Assessment Report [AR5]). Past studies have shown that if global greenhouse gas emissions continue to rise continually, the temperature will soar so high that such change cannot be stopped and will have permanent impact on human existence. It is estimated that the critical threshold of the atmospheric greenhouse gas concentration is at approximately 478 ppm. The greenhouse gas emission is believed to be the major factor for global warming thus it is the main reason that all countries have to participate in control of greenhouse gas emissions or they will face global consequence. 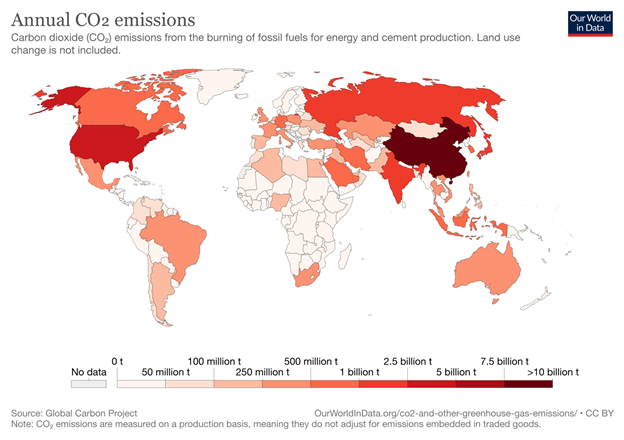 China, United States, India, Russian Federation and Japan are among the world’s top 5 annual CO2 producers. Although, currently in 2021, Thailand ranked 26th in term of annual CO2 emission at 257.77-million-ton CO2 equivalent per year (MtCO2e). No matter many reduction programs implemented, this number has raised up significantly by some 53% from the year 2000. Even though Thailand emission accounts for only around 1% of the total world CO2 emission. Major contributor of CO2 emission for Thailand is power generation at 39%.

Target toward carbon neutrality of Thailand

The event to which most environmentalists have paid attention this month should be the COP26, which took place at Glasgow, Scotland, United Kingdom between October 31st to November 13th 2021. Some people may understand the COP as a meeting about global warming. But this is not correct. The COP here specifically refers to the formal yearly meeting of the United Nations Framework Convention on Climate Change (UNFCCC) Parties. The term “COP” stands for Conference of the Parties, which is a governing body for international conventions in general. At COPs, all of the parties involved, including world leaders and heads of countries participate in the decision-making process of reviewing, assess progress in dealing with climate change and put the rules of the convention into effect. The COP that gained the most world’s attention should be COP21 in 2015, in which all nations agreed to limit the amount of carbon emissions and combat climate change which the agreement later entered into force since November 2016.

General Prayut Chan-o-cha, Prime Minister of Thailand also attended COP26. On this occasion, he stressed that Thailand had given its utmost importance on solving climate change problems. He presented the nation’s active actions in the past and announced the future improvement of its operation by setting the goal that Thailand would achieve its carbon neutrality by 2050 and net zero greenhouse gas emissions by 2065 in order to urgently take part in solving climate change. Thailand is among the world’s top 10 countries that will be affected the most by climate change. The Prime Minister also presented the concept of the Thai BCG Economic Model which would lead to a paradigm shift and environmentally-friendly economic development. It will be the main agenda of the APEC meeting hosted by Thailand next year. 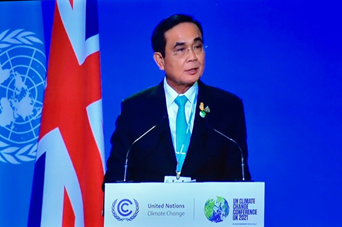 Prime Minister of Thailand Announced the Plan for Net Zero by 2065 at COP26
(Source: Ministry of Foreign Affairs of Thailand)

Participating in COP26 conference will highlight Thailand’s position on the greenhouse gas reduction and rectification. The conference has set national goals and guidelines on climate change actions that integrate and align with the sustainable development goals (SDGs) and elimination of poverty without leaving anyone behind, and in line with the principle of common but differentiated responsibility and respective capability. In the COP26, Thailand has shown its readiness and willingness to work with all parties to achieve the objectives of the Paris Agreement. In COP26, Thailand also has bilateral discussions on cooperation with Swiss Confederation, Germany, Singapore and the United States to develop cooperation on the issue.

Aside from the targets set mentioned above, two major policies of Thailand on greenhouse gas emission are:

According to the Office of Natural Resources and Environmental Policy and Planning’s website (mitigation.onep.go.th), a report by Intergovernmental Panel on Climate Change (IPCC) has identified Southeast Asia as a region with high vulnerability to climate change impact. Thailand is ranked by Germanwatch, an environmental NGO, as one of the top 10 countries at high risk of long-term climate change.

Being a developing country, Thailand still relies on fossil fuel energy and expands its urban areas continuously, resulting in steady increase of greenhouse gas emissions. It is estimated that in 2000, Thailand released greenhouse gases (excluding the land use change and forest sectors) accounted for 226.09 MtCO2e, and increased to 318.66 MtCO2e in 2013.

Paris Agreement under the UNFCCC requires all countries to propose goals and report progress within the country to resolve the climate change issue. The Agreement has a positive effect on establishing mechanisms for actions to resolve the problem, especially in the major greenhouse gas emitting countries. Thailand’s participation under the Paris Agreement is binding on Thailand to expedite preparations to take action and build capacity for solving the issue as well.

Since becoming a member of UNFCCC in 1994, Thailand has worked with other countries to maintain the level of greenhouse gas concentration in the atmosphere and adapted to the impacts of climate change while advancing the sustainable economic and social development continually.

On October 1st, 2015, Thailand submitted a proposal on the country’s participation in greenhouse gas reduction and climate change actions after 2020 (as known as Intended Nationally Determined Contribution: INDC) to the Secretariat of the UNFCCC, with a goal of reducing the country’s greenhouse gas emission after 2020 by 20-25 percent from the projected business-as-usual (BAU) scenario.

Subsequently, the Cabinet meeting on October 1st, 2015 approved the issue of climate change as a significant policy issue. From fiscal year 2016, the Budget Bureau and related agencies have been encouraged to support the implementation of greenhouse gas emission reduction targets and climate change actions. Later, the Cabinet meeting held on January 12th, 2016 assigned the Office of Natural Resources and Environmental Policy and Planning, together with relevant agencies, to prepare a roadmap specifying guidelines and detail measures to achieve the greenhouse gas reduction targets that had been set. The plan is called “NDC Roadmap on Mitigation 2021-2030.”

The measures to be taken under the roadmap can be summarized as below:

In order to advance the implementation of actions on climate change and promote the development of greenhouse gas reduction projects in various sectors, Thailand Greenhouse Gas Management Organization has established the Thailand Carbon Neutral Network (TCNN) to promote cooperation among government organizations, private sectors, and local communities in enhancing the reduction of greenhouse gases, building sustainable growth in a climate-friendly society, aiming for zero greenhouse gas emission, creating demands for carbon credit from the modern greenhouse gas reduction projects in line with the Thailand Voluntary Emission Reduction Program (T-VER) standards. This will help support and increase the domestic voluntary carbon market and will eventually be a factor that supports the operation to achieve Thailand’s Net Zero goal.