Thailand, Impacts of the Expandable Fire Accident at Polystyrene Factory

Perhaps an environmental incident that has got the greatest attention in Thailand for the month of July 2021 should be the fire accident at the factory of Ming Dih Chemical Co., Ltd., a large plastic foam and pellets factory located at King Kaew Road, Samut Prakan Province. The fire led to a huge explosion of a chemical storage tank and release of a large amount of chemicals to the atmosphere. This factory was adjacent to many housing estates. This incident has raised many questions on why environmental regulations in the country had not been improved earlier and weather the current regulations need improvement or not. This article summarizes the incident and recommendation from stakeholders.

Ming Dih Chemical Co., Ltd. is a downstream petrochemical company. The main product is plastic resin, particularly expandable polystyrene (EPS) resins. The company was registered on June 20th, 1989 and has operated for 32 years. The parent company is located in Taiwan under the name Ming Dih Group, which was founded in 1986. The Taiwan-based company got registered for trade in Thailand in 1989 under the name of Ming Dih Chemical Co., Ltd., and currently has factories in Taiwan and China, in addition to Thailand. EPS foam is used as an integral part of industrial and consumer packaging including construction materials. The group supplies its products to all over the world, including the United States, Australia, China, Europe, the Middle East and Southeast Asia, with a production capacity of 160,000 tons per year. The factory in Thailand mainly stored two hazardous substances: styrene monomer of approximately 1,600 ton and pentane of approximately 60–100 ton. The timeline of the incident is as follows: 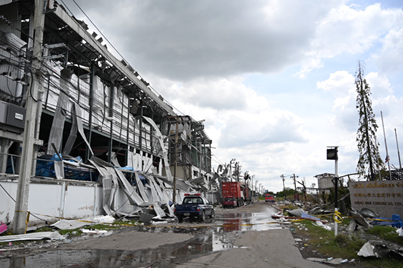 Picture taken a morning after the fire incident (Ref. PCD of MONRE)

Based on its license for operation, the factory had a building area of 1,100 m2, with installed machinery of 11,498 horsepower, received a license as 3rd category factory. Considering its production process, the factory was registered primary as type 60 (non-ferrous metal basic industries) and secondary as type 44 (production of synthetic resins elastomers, plastics, or synthetic fibers which are not glass fibers). According to the 2nd revision of Factory Act B.E. 2535 (1992), the definition of the 3rd category factory is a factory with a total machine horsepower of more than 50 horsepower and/or having more than 50 workers, or is a factory with potential significant pollution, so a permit is required before a factory can be established. The criteria for setting up a 3rd category factory is also set forth in the Factory Act, consisting of

1) Establishment of factories near housing estates, residential condominiums and row houses for residential purposes is prohibited; and

2) Establishment of factories within 100 meters from area of ​​public places such as schools or educational institutions, temples or religious places, hospitals, historical sites and government offices, which shall include natural resources and environment conservation areas, is prohibited. A factory must be located in an appropriate location and environment. There must be enough area for industrial operations according to the size and type or type of factory without causing harm, nuisance or damage to the person or property of others as well.

In the event that the factory has containers for hazardous substances such as flammable or explosive chemicals or any other liquids that may cause harm to persons, animals, plants, property or the environment with a container size of 25,000 liters or more, the containers must be stable, strong and conform to standards with certification of a professional engineering professionals or any other person designated by the Minister in the Government Gazette.

Where there are more than one container, a dam capable of storing such hazardous material must be built. The capacity of the dam must be equal to the volume of the largest storage tank to effectively prevent the spread of chemical. In the event of disaster to such containers and must provide materials or chemicals that are suitable for suspension or reduce the severity of the spread appropriately and adequately. In case the container is located in the open air, there must be a lightning conductor. Additionally, container that may generate static electricity must be grounded.

In 2008, the Ministry of Industry announced that factories that may cause severe impacts on the community must compile an Environmental Impact Report (EIA).The Ministerial Regulation No. 27 dated March 19, 2020, which was issued in accordance with the Factory Act B.E. 2535, designates factories that contain pollutants or chemicals as prescribed must prepare a report which contain information such as 1) the amount of production, possession and use of pollutants or chemicals 2) transfer of pollutants or chemicals outside the factory 3) operating procedures to control the release of pollutants or chemicals 4) characteristics of machinery and equipment 5) efficiency of environmental protection systems 6) monitoring result of emissions of such pollutants or chemicals to the environment 7) other information as prescribed by the Minister. This is basically a regulation similar to the PRTR system. However, the details of the regulation have not been announced, thus not yet fully effective. In the case of the recent fire accident, it took too much time for firefighters to understand what kind of chemical fire they were dealing with. They had to try many alternatives. It would have been actually better if they had information about chemical properties in advance, which could save lives.

This factory was established not only before the enactment of the Factory Act, but also before the announcement of the general city planning of Samut Prakan Province in 2001. Under this plan, the area in Soi King Kaew and nearby was marked as “purple area” or “industrial zone” but surrounded by “red areas” or “commercial areas”. As a result, the area surrounding this factory later became a residential area, with no “green area” that is “agricultural area” or “open space” between the factory areas where hazardous chemicals are stored and surrounding areas.

Mr.Warawut Silpa-archa, Minister of Natural Resources and Environment, commented on the incident that this factory was established more than 30 years ago. At that time, there was no EIA regulation. “In addition to looking at the city planning with the Ministry of Interior, we learned that the location of the factory is in the red area that are primarily intended for commercial purposes.” Many people wonder how was the factory set up in the community. “Therefore, it must be checked that the said area is intended to be commercial area or residential area. There are two possibilities that factory and house can locate next to each other: the factory was set up near the residential area or the residential area expanded to the factory site. We have to look at the city plan,” said Mr. Warawut.

Phenchom Saetang, Director of Ecological Alert and Recovery Foundation provided information that this factory initially had a production capacity of more 2,000 tons per year in 1991, but in the middle of 2019, the Department of Industrial Works permitted this factory to expand production capacity to 36,000 tons per year. This was done in disregard of that Samut Prakan Province has been declared as a pollution control area since 1994 due to severe pollution problems. She also complaint that “if PRTR regulation had been effective, this incident would never be this severe. Complaints against Department of Industrial Works will be officially filed.”

Mr. Suriya Jungrungruangkit, Minister of Industry, revealed that, according to discussions with the relevant agencies relating to this incident, the Department of Industrial Works had ordered the suspension of the factory operation and the ministry had no policy allowing this factory to resume operation in the same area because it was too close to the residential areas. The only possible way for the factory to resume its operation is to move to industrial estate and go through other legal procedures prescribed. “We are clear that there is no policy for the factory to reconstruct in the same area. If it wants to resume operation, it must relocate to an industrial estate area. The factory will also get benefits in accordance with the conditions of the Board of Investment (BOI)” said Mr. Suriya.

Mr. Suriya also added that, three days after the incident, it was found that the air quality was already found to be safe for the surrounding communities. “During the past three days, 14 areas around the 0–8 km range were found to have styrene in the range of 0.42–0.83 ppm (parts per million), which did not exceed the atmospheric standards 20 ppm set by the Pollution Control Department, while Styrene was found in the water from firefighting activities in the factory site but no styrene contaminants were found in nearby canals. However, nearby areas should temporarily refrain from using canal water for consumption during this period. 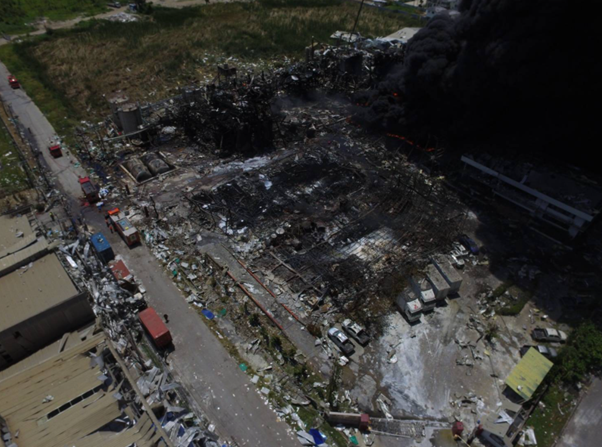 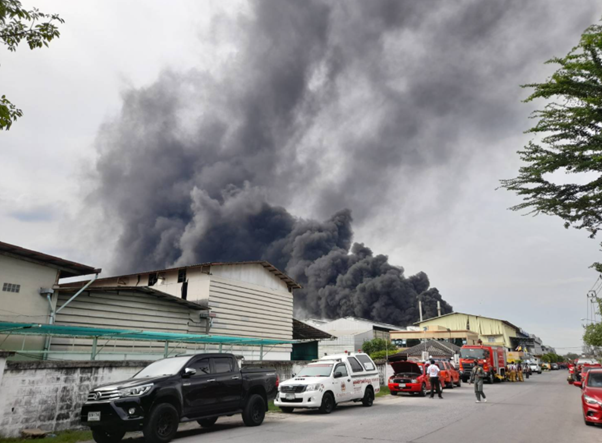 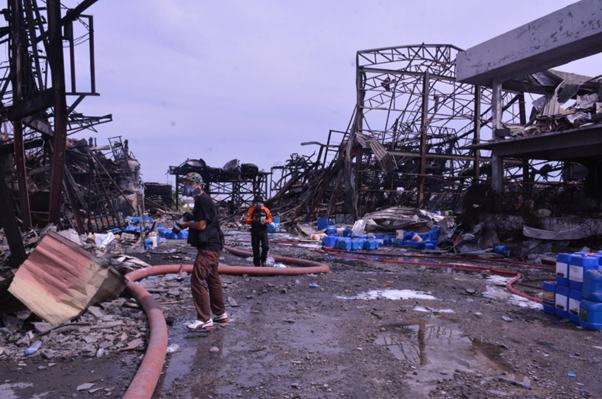 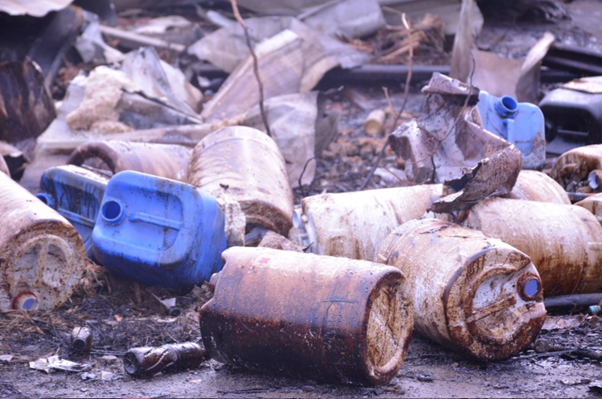 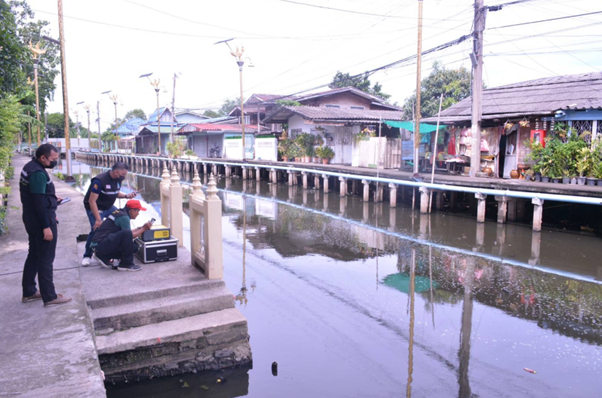