Impacts of Climate Change to the Philippines: The Business Perspective

The Philippines is among the top ten countries vulnerable to the negative effects of climate change. Because the geography of the Philippines is composed of numerous islands, the risk posed by natural hazards caused by the changing climate is high according to the 2019 report of the Institute for Economics and Peace [1]. 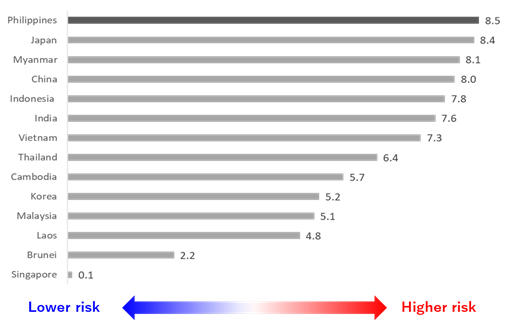 Figure 1. Comparing the risk posed by natural hazards in 10 different countries. Figure from [1].

Due to this, companies are concerned about how this will affect them currently and in the future. Climate change can cause stronger and more frequent typhoons to hit the country, especially as it is situated on the west of the Pacific Ocean. Typhoons originate over warm tropical oceans [2]. Thus, this makes the Philippines, a tropical country, susceptible to typhoons. Global warming can also cause sea levels to rise, which can flood low-lying areas (e.g., coastal cities like Metro Manila), and this is a major concern too. Metro Manila, where the consumption, infrastructure, manufacturing, and income of the country are concentrated [3], has some parts predicted to be submerged in water by 2050 from a 2019 study of Climate Central [4] (see Figure 2).

Additionally, in the Fourth Assessment Report of the Intergovernmental Panel on Climate Change (IPCC), it was said that the mean average annual maximum temperature of the Philippines between 1970-2000 has increased by about 0.14°C. The annual mean rainfall and the number of rainy days also increased which in turn increased the number of landslide and flood occurrences. These trends are expected to continue in the upcoming years [5]. Ocean acidification is another effect of global warming, and this may negatively affect sea life, which own of the major sources of food in the Philippines. The Philippines has a rich biodiversity and its economy greatly rely on the natural resources of the country [1, 5].

The largest impact of climate change on businesses in the Philippines is expected to be on the economy and markets, followed by the damage to physical assets and infrastructure [5]. The calculated costs that will be incurred due to climate change is 6-7% of the total GDP [6]. Typhoon Ondoy and Pepeng last 2009 amounted to around 4.4 billion USD worth of damages [5], while a more recent typhoon, Typhoon Rolly, which was considered as the strongest typhoon in the world for the year 2020, destroyed around 20 billion USD worth of properties [7]. Food security can also be affected by climate change. A study of the Asian Development Bank last 2009 projected that the rice yield potential would decrease by 75% in 2100, if no adaptation or technological improvements are going to be done [6]. 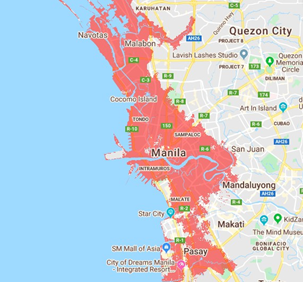 The Philippine Government has taken steps to address the impending crisis brought about by climate change to the country. The Climate Change Act (RA 9729) was passed into law last 2009 and this addresses the country’s vulnerability and the need for appropriate adaptation to the changing climate. RA 9729 establishes the Climate Change Commission (CCC), which should be the sole policy-making body within the government regarding climate change. They are required to draft the National Climate Change Framework and the National and Local Climate Change Action Plan. The act also states the UNFCCC objectives (greenhouse gas emission mitigation and adaptation) and the Hyogo Framework for Action addressing disaster risk reduction [8, 9]. As certified by the CCC, The Philippine Green Jobs Act was passed into law last 2016 to promote the creation of jobs regarding the betterment of the environment. Incentives are given to businesses that support sustainable and green practices and jobs [8, 9].

There are other laws have been passed that are related to climate change. Mini-hydroelectric Power Incentive Act (RA 7156) which was passed into law last 1991. This incentivizes mini-hydroelectric power developers to minimize the country’s dependency on outside energy supply and to promote energy self- sufficiency. Another law that is related to the protection of environment is the Biofuels Act (RA 9367) was passed into law last 2007 which states that it is mandatory to use biofuels in the fuel mix and that natural gas power plants are allowed to use neat diesel as an alternative fuel. A law that encourages to use and generate energy from renewable sources was passed last 2008. RA9513 or the Renewable Energy Act sets a minimum percentage of electricity generation from renewable sources for every electricity supplier [8].

Recently this year, the Philippine government plans to reduce greenhouse gas emissions by 75% by 2030 under the country’s commitment to the Paris Agreement on Climate Change. The target was increased from 70%, the target set four years ago. The Philippines ratified the agreement in 2017. The Paris Agreement came into force in 2016 which aims to lessen the fossil fuel consumption of the world to slow down the increase in global temperature [10].

Even though there are laws passed to address the climate change crisis in the Philippines, companies still believe that there is a lack of government policies and fiscal incentives. The 2011 report of PricewaterhouseCoopers (PwC) states that companies find the laws and climate change plans to be unclear and could be interpreted in different ways. The major concern of businesses on why they it is difficult to act on climate change is the high capital cost needed to follow regulations (see Figure 3). Businesses are also worried about the uncertainty in the future environment as the environment may change drastically [5]. 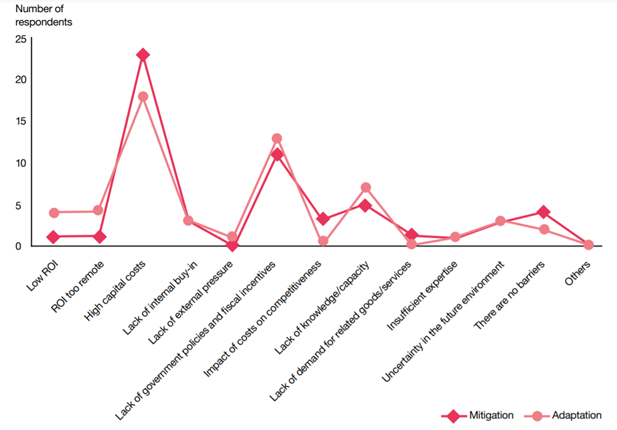 Figure 3. Companies were surveyed by PwC on what are the key barriers which hinders them to act on mitigation and adaptation regarding climate change. ROI = Return on Investment. High capital cost was the primary reason, followed by lack of government policies and lack of knowledge. Figure from [5].

To encourage businesses to partake in the climate change plans, the government should clearly define its plan and regulations. Strict implementation must be done, and financial aid and incentives must be given. Awareness and educational campaigns should also be done, not only to companies, but also to all citizens as they will be the consumers of the companies’ products.

Businesses can take various actions to mitigate and adapt to the physical impacts of climate change [5]. Using water efficiently can cut usage costs of businesses. To reduce damages that can be brought about by floods and typhoons, shoreline defenses and proper drainage canals can be built, especially to those near coastlines, in partnership with the government and foreign companies and governments. Japan is one of the leading countries in disaster risk management and companies and the Philippine government can cooperate with them regarding floods and typhoons as billions worth of finances are lost every year due to these. Businesses can also start on adapting to green buildings. These can reduce greenhouse gas emissions and reduce energy-related costs by 50% [11].

Businesses should also start investing on green technology. In the near future, international regulations will start to focus more on climate change actions which in turn would cause countries to follow suit. By the time government laws require companies to comply to these climate change policies, those who invested on green technology would be ready. Green technology also attracts customers which can increase the sales and the reputation of the company. Sustainable practices make the company and its products more marketable to the public as more and more people are getting conscious about the environment [12].

There is also a demand for green technology and infrastructure in the Philippines as it now slowly transitions to a low carbon economy [13]. Since the Philippines plans to reduce its greenhouse gas emissions by 75% in 2030, there are plenty of opportunities for local and foreign investors to invest in green technology in the country. An example now is the planned extension of the Manila LRT Line 1, in cooperation with the Japan International Cooperation Agency, for the promotion of low carbon transport [13]. Other projects to improve sustainable land use and energy usage and generation are also encouraged.

Partnering with Japanese and other foreign companies and investors would increase the international bonds ang relationship of the Philippines with the other countries. Since climate change is a global crisis, it is wise to invest and partner with different countries to be able to overcome this problem.