As a result of economic growth with increased traffic, industrialization and energy demand, India’s air pollution is getting worse by the day, especially in urban areas, where cars are a major source of emissions. In certain areas, pollution from factories and power plants is also an important issue.

In India, the National Air Quality Monitoring Program (NAMP), under the leadership of the CPCB, is being implemented. NAMP has launched since 1984 and is being implemented at 683 stations across the country (as of March 31, 2018) for substances such as SPM, RSPM, SO2, NOx, CO, etc., twice a week. Pollutants are sampled and monitored every 4 hours for gaseous pollutants and every 8 hours for particulate matter.

Currently, the data observed by NAMP is assessed based on the National Ambient Air Quality Standards (NAAQS) as an indicator. Monitoring results for each year can be retrieved at the following URL (as of September 2020, monitoring results for 2013-2018 can be available).
http://cpcb.nic.in/namp-data/

The NAAQS is not a standard that applies to emissions from factories and other sources, but rather is an indicator of general standards in India. If air quality observations indicate that a target substance is above the limit on two consecutive occasions, regular or continuous monitoring and additional testing are required.

In India, the National Air Quality Index (NAQI) has been introduced under the leadership of Prime Minister Modi and has calculated and published the NAQI for a number of cities. As of September 2020, the NAQI’s online database provides air quality data for observation sites in 22 states. The central government considers seven substances (PM2.5, PM10, nitrogen oxides, sulfur dioxide, ozone, carbon monoxide, and ammonia) in calculating the NAQI. These substances are also covered by the NAAQS. The NAAQS is positioned as a short-term measurement and the NAQI as a long-term monitoring. The NAQI is calculated using an average of 24 hours of data measured continuously at various monitoring locations and is published daily.

Air pollution levels are categorized into six levels, ranging from “good” to “severe,” with a brief description. Each level is labeled with a color scheme that allows the user to understand at a glance the standard concentration and its severity. For example, air quality is classified as “good” if it is below 50% of the regulatory standard. 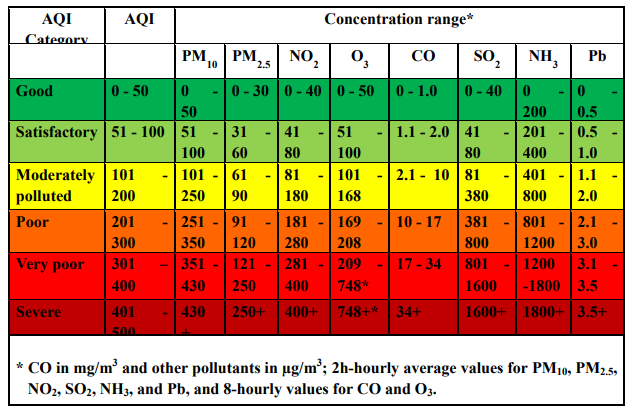 In India, the Air (Prevention and Control of Pollution) Act, 1981 (the “Air Act”) was enacted in 1981 with the aim of preventing, controlling and reducing air pollution. The Air Act prohibits factories from emitting pollutants into the air in excess of standards. It also gives authority to CPCB and SPCBs to ban the use of fuels and substances that cause air pollution.

Subordinate regulations to the Air Act are the Air (Prevention and Control of Pollution) Rules, 1982 and the Air (Prevention and Control of Pollution) (Union Territory) Rules. The former prescribes the details of the CPCB’s organizational operations such as meetings, budget, accounts, etc. The latter rules are applicable to the Union Territory and provide details regarding the establishment of pollution control management areas and procedures for setting up and operating industrial plants in those areas, as defined in the Air Act. However, these regulations do not set emission standards or thresholds for air pollution.