A remarkable water resource-related issue in Vietnam is water pollution due to the industrialization in recent years. A report published by the Ministry of Natural Resources and Environment (MONRE) has pointed out that wastewater from industrial parks, which averages 240,000 m3 per day, flows into the environment untreated and causes serious environmental pollution across the state. The background of such water pollution includes that nearly 40% of the country’s industrial parks do not have centralized wastewater treatment plants and that the remaining 60% often discharge wastewater untreated in order to reduce the treatment plant operation costs.

In particular, the accident caused by Formosa Hatin Steel, a Taiwanese steel company, in 2016 is a notable example. In this accident, toxic chemicals were discharged into the sea and this pollution has been referred to as the most serious environmental incident in Vietnam. It caused mass fish death in the coastal area over ​​more than 200 km in total, from Ha Tinh, Quang Binh, Quang Trong, to Thua Thien Hue provinces located in central Vietnam. The cause is said to be toxic chemicals (phenol, cyanide, iron hydroxide) discharged by a Formosa’s plant in the Vung Ang Economic Zone in Ha Tinh Province. In June 2016, Formosa acknowledged its responsibility and announced that it would pay $ 500 million for environmental restoration and compensation for fishery affected by the fish kills. The company also admitted its inadequate waste and wastewater treatment and pledged to improve the production processes. It also ensured that it would fully treat waste and wastewater before discharging it into the environment. Then, in July 2019, three years later, the MONRE announced that Formosa was compliant with national environmental standards. Specifically, an inspection conducted by MONRE, found that Formosa had almost completed the corrective measures on its wastewater treatment system as ordered by the government. At that time the company had corrected 52 out of 53 environmental violations and was in the process of shifting from the wet fire extinguishing system to the coke dry fire extinguishing system, which was more environmentally friendly.

As described above, wastewater from the industrial sector is closely related to water pollution, symbolizing the recent industrialization of the country. There are two main reasons why industrial wastewater becomes a major cause of water pollution: first, the awareness of environmental protection among business entities is still low: and second, the penalties for environmental offences are too easy. This is clearly illustrated by the problem of unpaid charges for discharging wastewater in Hanoi City. According to the National Economics University in Hanoi, a survey of 453 private companies in Hanoi showed that the total amount of paid charges for discharging wastewater significantly decreased from 683 million dong (about 29,300 USD) in 2009 to 62 million dong (about 2660 USD) in 2011.  This fact shows that not only low awareness of the environment among businesses, but also the easy fine for unpaid charges is the cause of continuous water pollution. 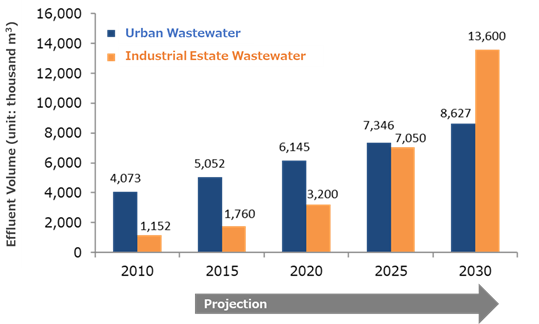 In Vietnam, management of water resources is performed under the Law on Environmental Protection (No. 55/2014/QH13), which governs the state’s environmental protection in general, and the Law on Water Resources (No. 17/2012/QH13), which is specialized in water resource management. These Laws are summarized as below. Under the Law on Environmental Protection, rules on water quality standards, wastewater quality standards, and wastewater monitoring have been enacted.

On the other hand, the Law on Water Resources (No. 17/2012/QH13) covers all aspects of water resource management from environmental protection costs, use of water resources, water saving, water-related disaster prevention, and the development of underground water. This Law contains some provisions governing manufacturing factories and thus should be understood.