Despite delays in certification process by the authorities and the postponement of the enforcement date incidental to the delay before the energy labeling was made compulsory, the awareness of energy labels, which regulates wide range of products, is increasing among Vietnamese consumers. Thanks to the energy labels, low energy-efficiency devices are being phased out of the market. In addition, changes in market share show that the labeling of energy-saving products is having a positive effect on the market. For example, in 2008, inverter air conditioners accounted for less than 1% of the market, but by 2014 this share had grown to 30%. In addition, the use of CFL bulbs has also increased in place of incandescent bulbs, with the elimination of incandescent bulbs of 60W and above and the use of high-efficiency T8 fluorescent bulbs replacing the low-efficiency T10 fluorescent bulbs. By June 2014, the Ministry of Industry and Trade (MOIT) has issued 6215 labeling certifications for 13 types of labeling-required equipment. These included televisions (473), lighting equipment (749), electric fans (1585), air conditioners (863), washing machines (301), rice cookers (1354), and transformers (210), among others. 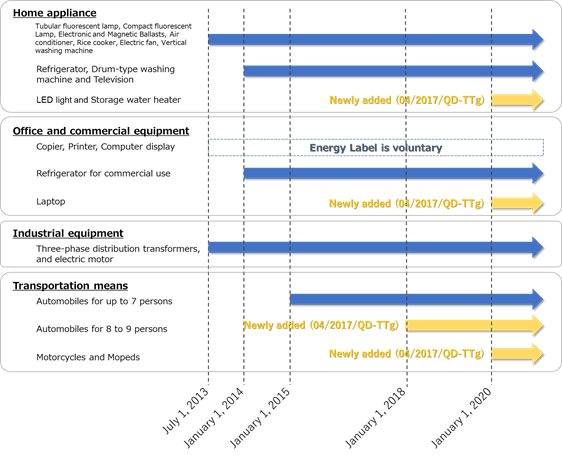 Prime Minister’s Decision on the list of equipment and means required to comply with Vietnam regulation on energy efficiency and its implementation schedule (No. 04/2017/QD-TTg)[1]

This decision was enacted on March 9, 2017, newly adding laptops, LED lighting, and motorcycles to regulated products subject to the energy label and MEPS. For energy labels, as per the following schedule, vehicles with eight to nine passengers will become mandatory from January 1, 2018, and LED lighting, storage water heaters, laptops, motorcycles and mopeds from January 1, 2020. However, copiers, printers and computer displays will still remain voluntary.

On the other hand, the Vietnam National Standards (TCVN) that define the MEPS for each product are specified in the Prime Minister’s Decision No. 24/2018/QD-TTg (enacted on May 18, 2018). The table below summarizes MEPS in Vietnam. Note that from 10 July 2020, the TCVN to be referred as MEPS will change for some equipment.

[1] This decision repealed the existing two decisions below: